2020 is the year of COVID-19 (Coronavirus infectious disease 2019) but 2019 will still be remembered for the return of measles to the United States almost two decades after it was eliminated. Nationwide, more than 1200 measles cases re-emerged. The largest epidemic occurred in New York City, where more than 50 children and adults were hospitalized, including 18 intensive care unit admissions. We have since learned that the epidemic was a direct consequence of sharp declines in vaccine coverage among an Orthodox Jewish community that was targeted with a coordinated campaign of antivaccine misinformation linked with alternative medicine [1]. The US remains at risk of losing its measles elimination status.

As bad as the New York epidemic was in 2019, in the coming years we can envision a far larger epidemic affecting the state of Texas. In many ways, Texas is now at the epicenter of an expanding antivaccine movement across America. Texas antivaccine groups are serving as a resource for other antivaccine movements throughout the country by demonstrating recruitment ideas, funding options, and legislative initiatives. According to the Texas Department of State Health Services (DSHS), more than 60,000 children are now denied their school vaccinations even though the vaccines are available, a phenomenon the World Health Organization labels as ”vaccine hesitancy.” However, that number does not include any of the estimated 325,000 home-schooled children in Texas, so the actual number of Texas school-aged children denied vaccinations might easily exceed 100,000.

How did we get to this point? Seventeen years ago, an antivaccine group persuaded a Texas legislator to include an amendment on a budget reform bill with language that allowed for philosophical or personal belief vaccine exemptions. Unfortunately, the exemptions began to accelerate in the 2010s, possibly due to the amplification of antivaccine misinformation through social media and e-commerce platforms (Fig. 1) 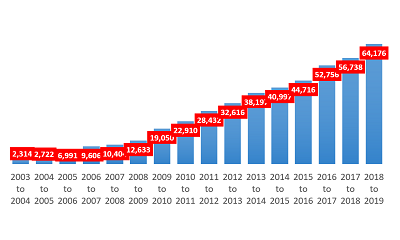 Fig. 1. The increase in nonmedical vaccine exemptions in Texas, 2003-2019. (Courtesy of The Immunization Partnership [TIP].)

There was a second sharp increase in vaccine exemption starting in 2015 following the proposal of a Texas House bill to eliminate nonmedical exemptions. The antivaccine community was ignited by this bill and formed a Texas-based antivaccine political action committee (PAC) linked to the far right wing of the Republican Party. The PAC received a significant level of support from the Tea Party in Texas and exercised considerable political influence by invoking terms that might appeal to libertarian sentiments, such as “health freedom” and “medical freedom” or “choice.” Although the bill to eliminate exemptions failed to move forward as it did in California, the antivaccine community gained increased power. With the concern that similar bills could continue to backfire, philosophical and personal belief exemptions remain in place in Texas.

Additional areas of concern include vaccine exemptions not being homogenously distributed. Instead, vaccine exemptions concentrate in selected “hotspot” areas, most notably in and around Austin and some of the North Texas cities, such as in Denton, Fort Worth, and Plano [2]. Recently the Texas Tribune identified schools in Austin where 20%, 30%, even 40% of schoolchildren were not vaccinated [3]. So far, we do not really understand the sociology behind vaccine exemptions among these populations, although anecdotally they appear to represent affluent or even educated populations with easy access to misinformation websites. In addition to low school vaccination coverage, 3 counties in Texas are predicted to be among the top 25 in the US at highest risk for a measles outbreak based on models that include not only exemption rates but international air travel and travel origin measles rates [4].

Measles is the most contagious of the childhood viral infections, and it was not surprising that this was the first illness to return once immunization rates declined in New York City among the Orthodox Jewish population in 2019. We should therefore expect that measles will re-emerge among populations in Texas where vaccine coverage is low, and it would not be unreasonable to expect a major measles epidemic in an Austin or North Texas school sometime soon. Possibly measles will then spread throughout the community because many of the affected schoolchildren have infant siblings below the age when they might typically receive their first measles immunization. Sadly, these infants will be the ones hospitalized with measles pneumonia and encephalitis.

We are worried. We fear that measles will return to Texas and land children in hospitals and pediatric ICUs across our state. As pediatricians working abroad, each of us in our travels to Africa, Asia, or Central and South America has witnessed first-hand how measles can destroy the lungs or central nervous system of an infant or child. The idea that measles might return to Texas is for us abhorrent, especially if we can easily stop it. We are also concerned about the low uptake of the HPV and other vaccines. Regarding the former, this is one of our most potent weapons against cancer and among the most effective tools for cancer prevention.

Ultimately, the return of measles and other diseases to Texas is not inevitable, especially if we can return vaccine coverage rates to schools in Austin or in North Texas to pre-21st century levels. Doing so, however, will likely require efforts to counter the antivaccine movement’s misinformation campaign, its political arm, and its PACs. It will also probably require acceleration of provaccine advocacy in Texas. Importantly, we need to find new ways to think about vaccine policy in order to regain public trust.

To begin that journey, we are guest editing this special issue of the Journal of Applied Research on Children (JARC) devoted to Vaccinations in Texas: Lessons Learned for Evidence-Based Practices for Child Health . This collection of invited submissions in areas affecting the immunization of children includes but is not limited to:

· The impact of cases going undiagnosed.

· The frontline consequences of these cases (hidden health risks).

We hope through this issue to add new substance and information to the evidence base of what might be required to ensure that vaccinations remain a “new normal” in Texas. Our hope is that this collection will help to inform and shape a new public policy.

We are committed to making vaccines and vaccinations a priority to prevent the return of measles and other vaccine-preventable diseases to Texas. Our hope is that this issue of JARC will become a first step towards establishing a provaccine blueprint and roadmap.

Lessons from the Front Line: Advocating for Vaccine Policies at the Texas Capitol During Turbulent Times
Rekha Lakshmanan, MHA and Jason Sabo, MA

Perspective from the Field

“It falls on all our shoulders”: Overcoming Barriers to Delivering Sex Education in West Texas Schools
Cristina Leos and David Wiley